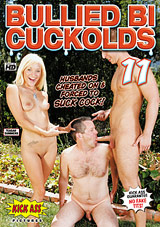 Presley Maddox was tired of being married to a wimp like Billy DeWitt. She had fallen for him because she thought he was so sensitive, it turned out he was just a spineless bitch. The fact that Billy’s dick was so small Presley couldn’t even feel it when he fucked her made matters worse and having had enough she brought home Wolf Hudson to fuck her right.

Presley wasn’t happy with simply cuckolding her husband. She ordered him to put on a wig, her panties and bra. Billy tried to refuse but once again his lack of spine made him cave in. Wolf had a lot of fun watching Billy in drag, laughing right in Billy’s humiliated face.