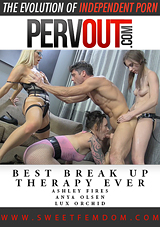 Psychologist Ashley Fires was having difficulty treating Lance Hart’s mental condition. After his break-up with girlfriend Lux Orchid he had started a new relationship with Anya Olsen, but he was still fixated on his former love. Lance’s obsession was deeply rooted, and Ashley decided to take extraordinary measures to treat it.

She invited Lux to her office and hypnotized her, and was able to command her to do her bidding. The psychologist called Lance and Anya to join them and deal with the issue in a non-orthodox manner. With Lux under her control, Ashley asked Lance to have sex with his new love in front of his older flame as a way to break with the past. Only when Ashley snapped her fingers could Lux come out of her trance, and once Ashley snapped them again she would go back under.